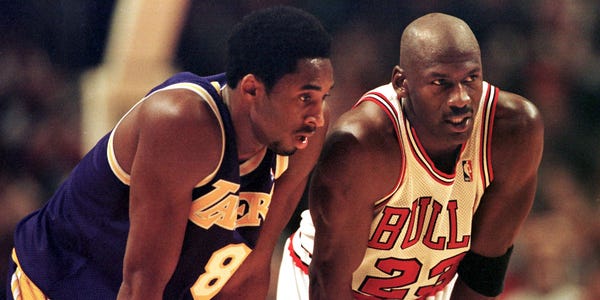 At the beginning of the ’96 season, prime Jordan could make no mistakes. Fresh off winning a ring against Seattle, MJ was at basketball god status once again. Though, there was what seemed like a change of winds coming from the West. An 18-year-old kid drafted 13th, out of high school, who was possibly receiving some comparisons to a young Jordan.

I wish I could tell you that their first meeting was like a clash between a tornado and hurricane, but unfortunately, Jordan crushed that game. MJ went on to score 30 points leading the Bulls to a 129-123 win over the Lakers. Kobe, in only his 19th game as a professional, played 10 minutes and put up 5 points.

Kobe came looking for blood: “I was thinking in my mind, I didn’t care. I’m going to destroy this guy. I don’t care if I’m 18, I’m coming for blood.” Bryant quickly realized that facing Jordan is a whole different thing, even getting a personal lesson during the game as Kobe remembers…

” He caught the ball in the corner and he made his little pirouette spin that he does and sneaks baseline. I fell for it, and he went by me and dunked it…“-“…I’ve seen that move thousands of times and I can’t believe I just fell for it. And then after that, it was like, ‘OK, let’s get to work.’ Every time I faced him I wanted to see how he was going to respond to his same moves.” Kobe didn’t have his best game ever that night, but a vision was created towards a future mentality he would need to adopt.