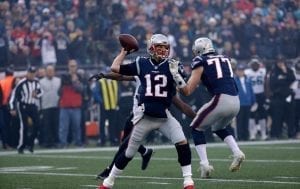 The early odds are out for the 2021 Super Bowl, and some familiar teams find themselves at the top. Here are 5 teams that have the best chance to win next year’s Super Bowl.

The Patriots seem to always be in the Super Bowl conversation. But, this has always coincided with quarterback Tom Brady on the team. Brady has hit free agency, and there is uncertainty for future dominance at Gillette Stadium.

With Drew Brees coming back for at least one more season, the Saints have one of the best offenses in the entire NFL. The weak-link has always been the defense. If the defense can keep it together, Brees has the opportunity of going off into the Super Bowl sunset like quarterback greats Peyton Manning and John Elway.

With Lamar Jackson taking over quarterback duties for the Ravens in 2019-2020, he easily won the league’s MVP. Can Jackson take his team to new Super Bowl heights? The Ravens have a great chance to jump onto the scene.

Super Bowl losing teams the year prior struggle to make the playoffs the following year. However, this team has the defense and balanced offense to give it another shot in 2021.

The Chiefs will be in the Super Bowl conversation with years to come because of quarterback Patrick Mahomes. However, it is terribly hard to repeat as Super Bowl Champions. Only 6 teams have won back-to-back titles with the last being the New England Patriots in 2004 and 2005.